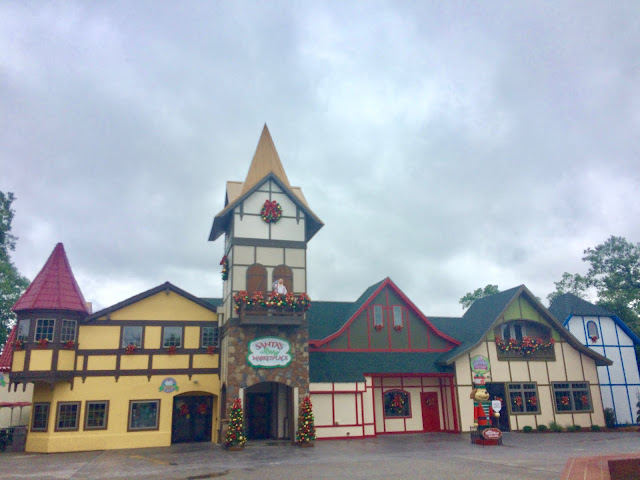 This past weekend, Eric's work hosted its annual company picnic and we were treated to Holiday World!!  One of my little "goals" for the summer is to camp once a month.  It's fun, relaxing, and a great way to unplug and enjoy some family time.   For a few years now, we have been talking about camping at Lake Rudolph right next to Holiday World, so this was a great opportunity to go ahead and book our site.

If you ever find yourself in the middle of a drought and in need of some rain, just have me book a camping trip or baseball tournament because it never fails to pour.  Of course, this weekend was no different.  We left work early, picked up the kids, ate a quick lunch and hit the road.  We were lucky to get there between rain showers and quickly set up camp before the next round arrived. 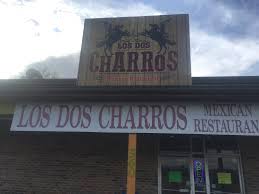 Typically, we cook when we camp but knew it would be a hassle since it was such a quick trip.  Instead, we trusted online reviews and found ourselves at a hole-in-the-wall Mexican restaurant a few towns over. I'm proud to say that it more than lived up to its hype.

After dinner, we went back to the camper and settled the kids in for bed.  Our normal routine is to bring some movies for them to watch while Eric and I sit outside and read, play games or talk.  There was supposed to be Wifi at the campground so we we skipped the movies with plans to stream something.  Turns out you can't stream videos!  Luckily, they were tired so after a few minutes of Netflix on the phone data, they were out! 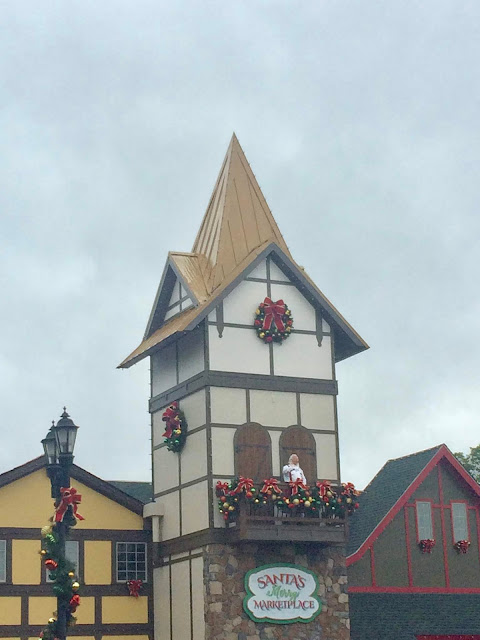 Saturday was supposed to be a total washout, but it was dry in the morning so we headed straight to Holiday World after a quick breakfast.  The campground had a complimentary shuttle, but we opted to drive and were lucky enough to get second row parking.  We walked right in and were created by a charming little village with Santa waving from the balcony.

This was only my second trip to Holiday World and the first one was nine years ago.  I barely remember it, but it is quaint, clean and very well themed with attractions centered around holidays. 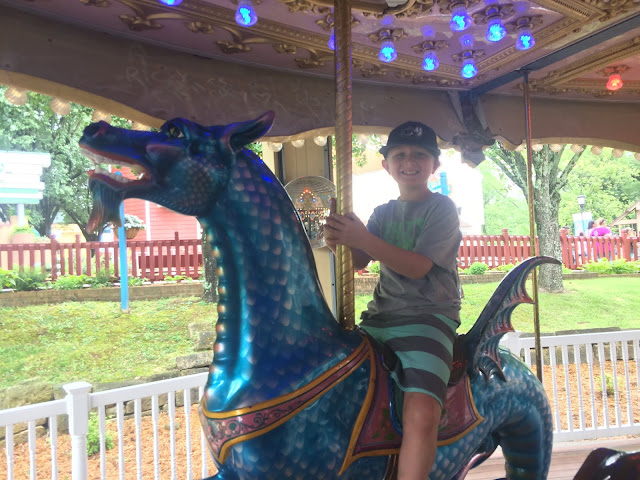 Disney has really spoiled our kids, but they loved the theming so much and kept saying it reminded them of certain aspects of Magic Kingdom such as the walk into the park.  It was also similar to rope-dropping at Disney, only much less crowd.  Similarly, we started by hitting up as many rides as possible.  Before noon we had enjoyed: 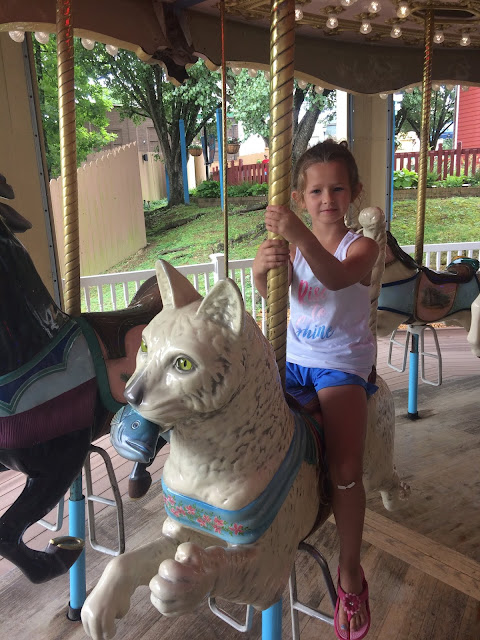 This also included several breaks to enjoy the free drinks and time to play and explore the children's area.  This is where Disney could learn from visiting other parks.  They have a fairly secluded area in the back of the park called Holidog's Fun Town.  The area boasts a large playground with a soft, rubber landing area underneath.  There is also a splash pad area, several small riders, a kiddie coaster, family restrooms, character meet and greets and benches for parents to rest. Because it was so secluded, it was easy to escape the heat and rest while the kiddos played. 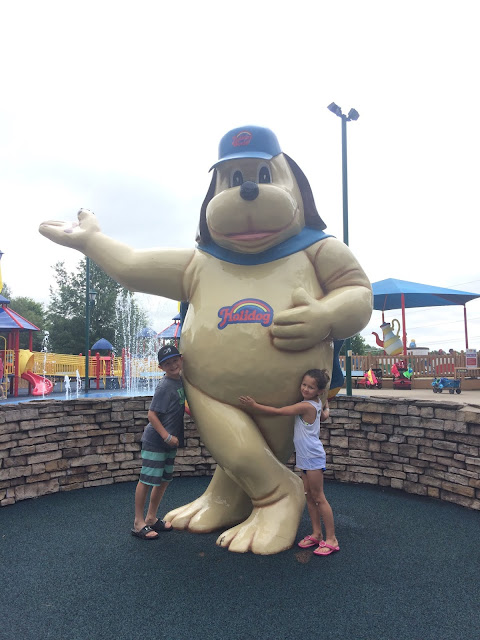 As for lunch, Eric's company was hosted in a shelter area where we were treated to hotdogs, hamburgers, veggies, beans, mac n'cheese, and dessert.  Holidog also made an appearance but we were a little late catching him and didn't get a picture.  It was nice catching up with Eric's co-workers and getting recharged for our afternoon at the waterpark.  I am so grateful that we quite literally spent no money inside the park.  His company took care of all the details so that we were able to just enjoy being together as a family. 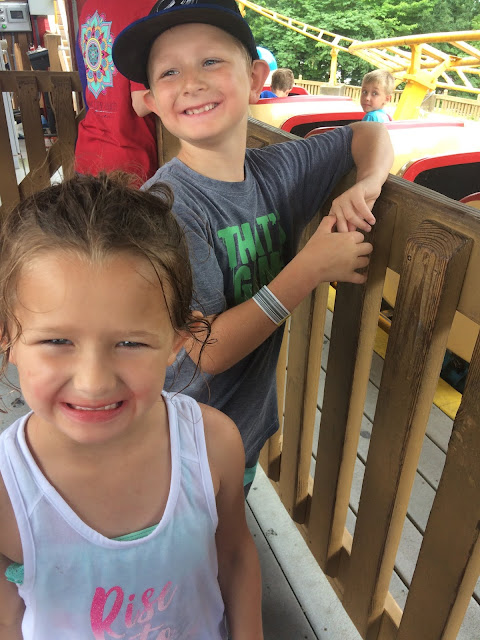 After lunch we headed to Slashin' Safari, and as luck would have it, the sun decided to make a brief appearance.  I left my camera in the locker, so I don't have pictures to prove our fun, but it was a blast! We started with the Racer Slides at which point Eli somehow let his mat go down the slide.  He had to walk down the steps by himself while the rest of us rode down. He was not a bit happy about, and I think it will be a point of contention for years to come.  You see, Eli is a little hesitant to ride things while Ellie jumps in head first...both literally and figuratively. Anyway, he doesn't want to be outdone by a girl, so he makes excuses for bailing.  In this case, he "accidentally" let his mat go. Or so he says. 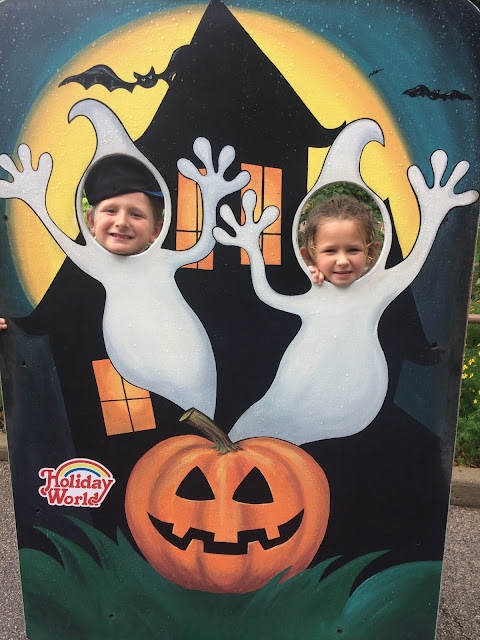 In any case, we headed to some kiddie slides after that fiasco.  The kids had a blast while Eric and I propped out feet up to relax and people watch.  After a good deal of time had passed, we headed to the wave pool and eventually made our way to ride the Wildebeast and the Mammoth.  They were amazing and each had relatively short lines, which I'm sure can be attributed to the weather.

After getting off of the Mammoth we were in route to another kid area when a major storm blew up.  It was torrential downpours, cloud to ground lightening and lots of thunder.  We took shelter under a picnic area and enjoyed talking with people from Bowling Green who we kept bumping into.  Thankfully, Eric had the foresight to look up the raincheck policy before leaving and saw that if operations suspend for more than 90 minutes prior to 4:00, all guests would receive a free ticket. 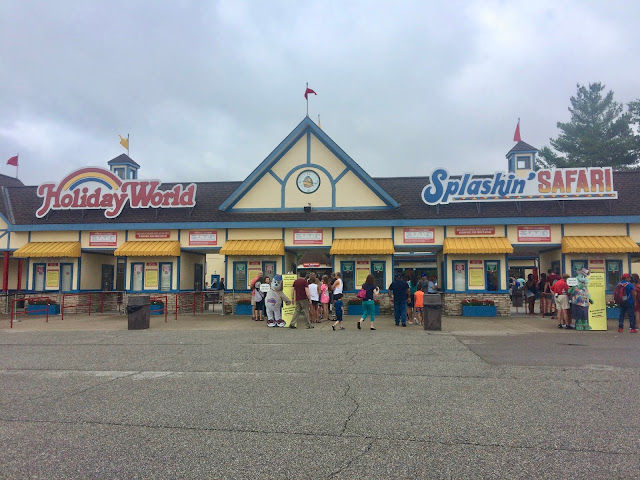 As luck would have it, the first storm rolled out about an hour after operations first shutdown and another storm was right on it's heels.  We could tell the staff was slowly closing things down, so we took our time changing into dry clothes and and browsing the gift shops.  We asked an employee in guest relations about the raincheck and she directed us to the front gates. On the way out, we stopped to pose for pictures and meet Santa.  We were thrilled when we spotted someone handing out tickets and even more thrilled to learn that the raincheck was good for any day this season! We contemplated going back the next day but decided against it once we saw the weather.  We play a baseball tournament in the area next month and decided to hold on to them until then. 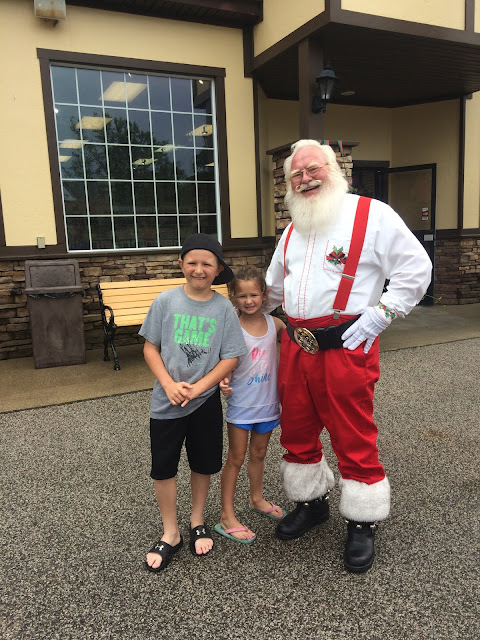 After leaving the park, we were famished and decided to head back into town for dinner. First we stopped to check on the camper and make sure there was no damage from the storm.  Finding everything well, we trusted the online reviews and headed to The Chateau.  Once again, the reviews were spot on the the buffet was delicious!  The kids particularly enjoyed the dessert and made multiple trips back through the line. 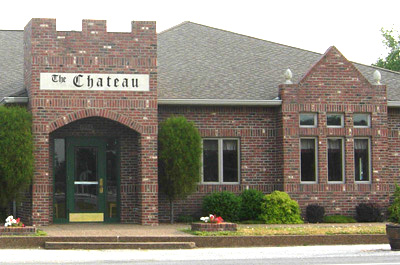 Back at the campsite, we let the kids play for a bit while we relaxed. Honestly, we did not get to enjoy the campground amenities as much as we would have liked because of the rain. There was a pool, two playgrounds, and putt-putt.  Thankfully, the smaller playground was right across from our site, so the kids could run around it a bit. Ellie and I were more than ready to shower when night finally came and found the facilities to be both warm and clean. We were so worn out that once the kids were asleep, Eric and I were right behind them. 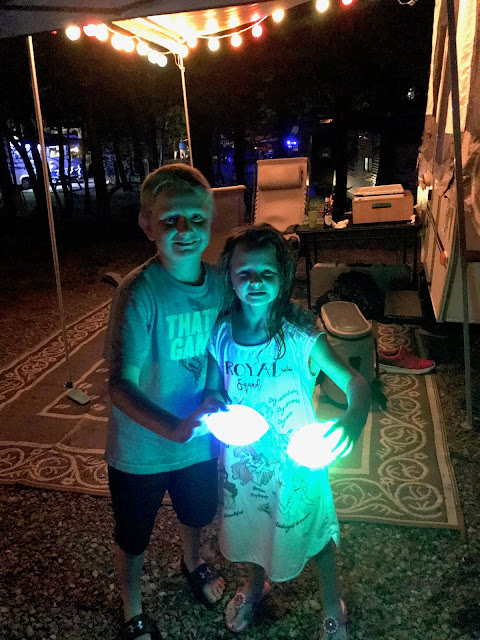 On Sunday morning we slept as late as possible before packing up and hitting the road.  Again, we dodged the rain and made it home in enough time to enjoy a quiet Sunday.  It really was a nice trip despite the rain.  I mean, how can we complain after we put in a full-day at the park and still got a raincheck.  We can't wait to go back!
at 7:00 PM